This monument was donated by the Spanish community in Argentina, for the centenary of the May Revolution, in 1910. The fundamental stone was set back then, even though the monument was not inaugurated until 1927. It is completely made of Carrara marble and bronze, constituting an impressive Art Nouveau work. Unfortunately, its mentors and builders experienced many obstacles. The Catalan sculptor Agustín Querol y Subirats, winner of the bidding for the construction, passed away in the year the project started; it was continued by Cipriano Folgueras, who passed away as well, very shortly afterwards (1911). Finally, the artist who finished the work was Antonio Moliné.
This monument is strategically located in a spot that allows for unbeatable contemplation from the distance and the different perspectives.
It is the symbol of considerable progress of relations between Argentina and Spain, as the centenary was a moment of reconciliation between both countries, after the strong anti-Spanish atmosphere that had ruled since the independence.
“Madre Patria” (Spain) started then to be used, and Infant Isabel de Borbón attended the celebrations of the centenary; and the values regarding our Hispanic roots came back with great strength. It is, in other words, the present from the Spanish to the Argentinian, thus starting a new stage in their relation. 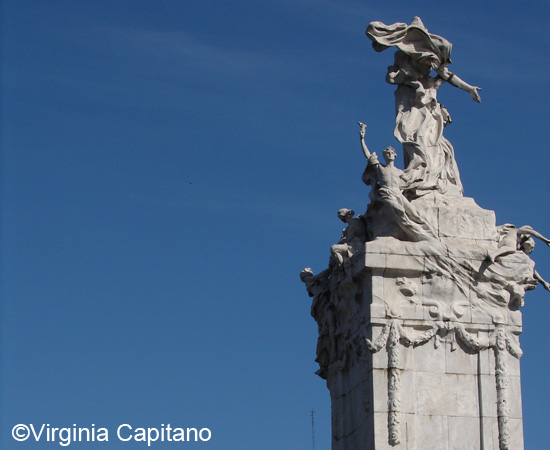