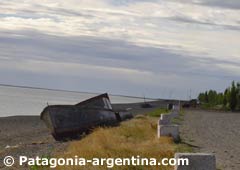 The Santa Cruz estuary, on whose southern margin the population is settled, it offers itself a picturesque frame, with its wide course and the different tonalities that water takes depending on the time of day. It has an extension of 25 km.

From its mouth of access between Punta Norte and Cascajo , forming a channel of 2 km wide, both the estuary and its margins offer the possibility of practicing boating, water skiing and sailing  It is also worth it for lovers of fishing, there you can get  bass, silverside, trout and perch. 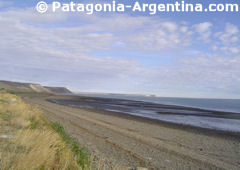 Still exist on the coast of the estuary the small abandoned boats that used to transport merchandise to the main ports of the country abroad, in the times of splendor of the locality.

The Cruz del Centenario, inaugurated on December 1, 1978, on the centenary of the historic arrival in Cañadón Missionaries of the Naval Squadron commanded by the Commodore Py, is one of the great attractions of the waterfront of the estuary. It is located at the intersection of Avenida Julio A. Roca and Comandante Luis Piedra Buena.

In the center of the estuary you can see the Isla Leones , settlement of seabird colonies.