If Ushuaia is your destination, you can sail  the southernmost seas, meeting unsuspected corners and admiring a still virgin nature. 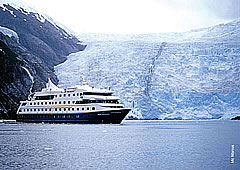 Feel like the first explorers and navigators who took the greatest challenge: to join the Pacific and Atlantic oceans by crossing straits and fjords.

At Patagonia-argentina.com we have already introduced you to the city of Ushuaia, the mountains and fairy tale forests that surround it. But the true soul of Tierra del Fuego is split in two. One part is the one we have already shown to you, the land. And the other is the Atlantic ocean, islands, channels and a huge amount of possible roads between rocks and glaciers. There is no better option for you to experience all this than the Mare Australis Cruise. Let’s use their own introducing words:

“In the southernmost region in the world, where the seas meet the mountains, Pacific and Atlantic oceans hug, the silence is touching and the flora, fauna and geography wake the senses up. In this virgin and magical area, glaciers, snow, sea lions, penguins and the exuberant vegetation will witness the passing of the Mare Australis Expedition Cruise, through legendary sea roads which are mixed with the history of sailors and aborigines in one of the less explored places of the world, a region that is as beautiful as it is indomitable, as pure and impressive as you may have never imagined.” 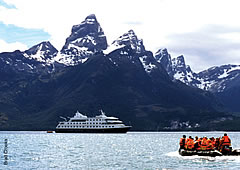 During the cruise there will be interesting talks and audio-visual exhibition on the wildlife, history and geography of this legendary region.

You will learn about the geographic environment where the expedition cruise ship sails and each one of the channels, fjords and glaciers, making this route a unique and mysterious place at the end of the earth.

You will enjoy a beautiful audio-visual exhibition of the different species making up the Magellan forest. You will discover and remember the Spanish navigators and the English corsairs who were essential for the discovery and colonization south Tierra del Fuego. You will also know the customs, the way of living and the mythology of the native inhabitants.

Glaciology will be the subject of other of these talks. Mysteries and theories of the ice giants that were originated over 50.000 years ago, and some of them are still advancing.

The expeditions: On land!

During the cruise, there will be daily inland tours lasting approximately two hours, organized by the Mare Australis Expedition Group, that consist of walks through trails in the native forest and visits to glaciers. They include talks on the flora and fauna of the area. A delicious whisky with the millenary ice, or a cup of hot chocolate will be served at the end of the excursions. According to the chosen route they can be:

Ainsworth Bay : Here you land on the beach to start a 20-minute walk through quiet trails in the native woods towards the beaver dam. You will then head towards a colony of sea elephants.

Tucker Islet : Visit to a colony of Magellan penguins that nest among the vegetation in burrows made by themselves, accompanied by the assailant skua galls (predator birds) diving around.

D’Agostini Fjord : A sea route surrounded by icebergs, which passes several glaciers. In a memorable awakening, you can watch the dance of light at dawn in the glaciers ice and the stunning sound of the ice breaking in its interior.

Garibaldi Glacier : Is one of the most beautiful glaciers of this cruise, a breathtaking mass of blue ice. You will disembark in one of the solitary beaches of the Garibaldi Inlet, from where you will penetrate one of the wildest and thickest forests of Patagonia.

Puerto Williams : Located at the northern end of Navarino Island, Puerto Williams, with no more than two thousand inhabitants is surrounded by forests, waterfalls, lakes and rivers very apt for fishing. This is the place where the last direct surviving descendants of the Yagan Indians still live .

Cape Horn : This is a legendary and mythical place where the Pacific and Atlantic oceans meet, and the last promontory of South America. It has cliffs of almost 425 meters high, a lighthouse and a monument representing an albatross.

Wulaia Bay : An ancient indigenous site with high archaeological value. It offers a beautiful visual spectacle because of its vegetation and its bay views.

Pia Glacier : It is located on the northwest arm of the Beagle Channel. You will head towards an observation point that offers excellent conditions to view the mountain range where the glacier originates, and its progress until it falls into the sea. Here you will listen to the thunderous noises caused by the large masses of ice cracking and dropping into the bay.

Magdalena Island : Located in the middle of the Strait of Magellan, it is a natural reserve of Magellan penguins, cormorants, and other birds. 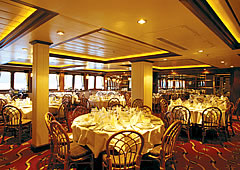 In order to make your stay on the cruise ship comfortable, we recommend sports clothing. Summer nights and sometimes during the days the Magellan climate is cold, that is why we recommend sweaters, jackets, pants, rain garments, gloves and a pair of firm shoes or boots during the excursions. 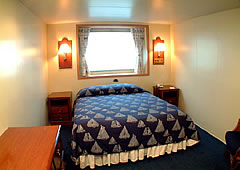 The ship does not have elevators or equipment necessary for the handicapped. The rates include breakfast, lunch and dinner, open bar, daily land excursions, welcome and goodbye drinks, whisky and hot chocolate during the excursions to the glaciers and all the activities inside the ship. 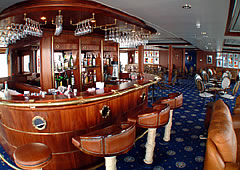 There is a shop on board where you will find exclusive designs in sports wear, souvenirs and different gift items. Items purchased at the shop such as souvenirs, videos, sportswear and others can be paid with Mastercard, Visa, American Express, Diners credit cards, traveler’s checks, US dollars, Euros or Chilean pesos. 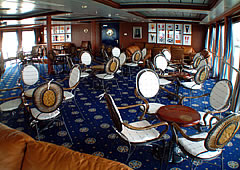 Official languages on board are Spanish and English. However, guides speaking French, German and Italian will be available. Mare Australis Cruise regrets not being able to accept animals on board.

All the pictures in this article belong to Mare Australis Cruise and are copyrighted.