Describing the marvel…
Learn how they originated, which and where the most important falls are, plus all the essential information to know this Wonder of the World. 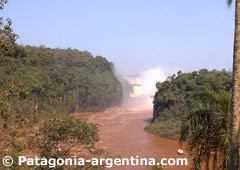 The Iguazú River is born in Brazil, in the mountain Serra do Mar, in Paraná. It flows gently down many kilometers of flat land, towards the southwest, before reaching the Paraná River, where its course changes dramatically. Small islands begin to create rapids and “white water” and the current gathers speed, causing the river to split off into smaller ones. But it soon reaches a gigantic drop off, which was caused by an geological fault hundreds of thousands years earlier. This precipice, added to the smaller rivers we described earlier, creates agiant system of waterfalls, with more than 270 falls arranged in a giant fan, each between 40 and 90 meters high.

Fact: when the falls were born almost 200 thousand years ago, the falls were located where the Paraná and Iguazú, where today you will find the union of the three frontiers. But due to the process of erosion, it has 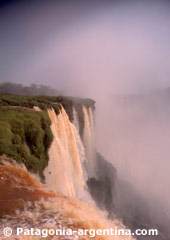 moved back 23 kilometers from its original point of origin. It is believed that the relocation will continue.

The largest fall is the Devil’s Throat (la Garganta del Diablo) located at the main channel of the river. The fall has its origin in Unión, which is located on the boarder of Brazil and Argentina, it is 80 meters tall and the spray created by the waterfall isvisible from 7 kilometers away. Other important falls are the Alvar Núñez, the Two Sisters (Dos Hermanas) which has a natural pool 8 meters deep,the Bosetti and the Chico Alférez that break into two. Above all in the upper region, you will find the San Martín Fall, which constantly roars due to its double drop off of 70 meters.

The continuous cascade forms a 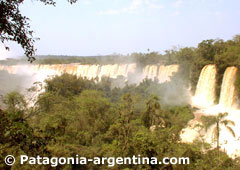 special mist which when kissed by sunbeamsgives birth to an infinite number of rainbows, and is one of the more common postcards of the region.

The waterfall system is more than 4 kilometers wide, which combined with its height and the volume of the water during the rainy season makes it one of the largest in the world. Its width is four times larger than the Niagara Falls, located in the United States.