Ceferino, son of a Mapuche Chief, wanted to be a priest and even studied in Rome, where he met pope Pio X. Today he is worshipped all over the north of Patagonia and year after year thousands of pilgrims visit the places where he lived and where his remains are located. We tell you his life history and leave a controversy to be interpreted in its historical context. 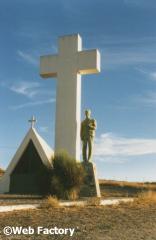 In the town of Chimpay, located in the very center of the middle Valley of Rio Negro, on 26th August 1886, Ceferino Namuncura was born. He was the son of the native chief Manuel Namuncura (heir of Calfucurá, legendary Mapuche chief who resisted the white men for a long time in their coming to the lands of the south) and a captive woman, Rosario Burgos.

He studied at a school of the Salesianos Order and there he discovered his vocation: he wanted to be a priest in order to bring to those of his same race the message of the Gospel. From his early years his health was not very well, but he started his priesthood studies in Viedma. There, he was spotted by Monsignor Cagliero and he decided to send him to study in Rome, believing the change of climate would benefit Ceferino.

Once in Rome, he is received by Pope Pio X and in front of His Holiness he gives a brief speech. His health kept getting worse and finally, a year after his arrival in Rome, he died. It was May 11th 1905 and he was not 19 years old yet.

It is said that the
Pope, in deep sadness, said: “He was a beautiful hope for the missions in Patagonia, but now he will be its more valid protector”.

Years later his remains were taken to the village of Pedro Luro in the Province of Buenos Aires, where there once was Mercedes Fort, a place founded by General Juan Manuel de Rosas during his expedition to the south. Today there is a reconstruction of a colonial fort that travelers can visit.

In Chimpay, his birth town, they especially celebrate his birth and death dates. The latter particularly opens a whole week of celebrations that end up the Sunday that follows August the 26th with a traditional religious walk that takes you to the Ceferino Monument. At this place there is a large park by the river that gives the traveler the possibility to rest quietly and comfortably.

Ceferino’s story: strong blow for the cultural and social independence of the native people, or a final acceptance of their “human kindness”?

Ceferino’s life happens during the years of the Campaign of the Desert, carried out by General Roca to conquer the huge territory of the argentine south, almost only inhabited by natives by then. 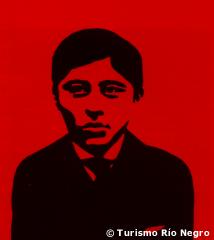 The Salesianos priests established a domination plan over the native towns that was pointed at the conversion of the children and the youngsters, in order to get through them to the submission of the adults or the tribe elders. Converted and controlled, the indians, particularly mapuches, were no longer a menace for their interests and those of the landlords and army people of the time.

The dominion of the land was guaranteed by the domination of the souls. In this context Ceferino’s conversion occurred and so did his later beatification helped by death at a young age. Indians already had their saint and martyr, and this attracted the most reticent ones into the churches of the Salesianos and made the children of “the people of the land” crowd the “priests” schools that covered this region in Patagonia. Thus, this other conquest took part, parallel to and matching part of the army conquest of General Roca. Mission accomplished.

But, let’s see things from a different angle

The Salesianos, contrary to what happened with other branches within the church at the moment, did not establish a system of dominion of the natives by force, compelling them to hard work. They considered that the best and only way of achieving the integration of natives into the “new world”, that is the conqueror’s civilization’s world, was through education. Their work consisted mainly in the establishment of schools, traditional in Patagonia for their rules and architecture concepts, destined to form children and youngsters in the different fields of knowledge and also in religious tuition, obviously.

Both the children of the white and the children of the natives attended these schools. Thus, Salesianos shoed in practice that they considered Indians as their brethren, that these like those should receive the same care and that, also, they could become saints. Ceferino was there to prove that. Thus, the Salesianos’ work can be included in progress project, overcoming differences between whites and natives.