San Pedro de Atacama is definitely a good idea. Born from the core of the pre-Columbian Atacamean culture, this chilean town is chosen every year by thousands of visitors lured by its extraordinary natural wonders, such as salt flats, small lakes and geysers.

I had the pleasant opportunity of visiting San Pedro early this month and I must say that it was one of the most amazing trips I’ve ever made. Perhaps the fact that it is not a traditional destination, or the little information available to me beforehand, made San Pedro reveal to my senses with the force of the experiences that the imagination cannot anticipate. 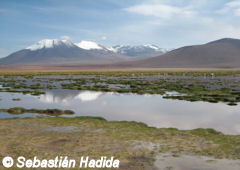 And then, without a warning, I found myself immersed in the spell of the little unpaved streets, small adobe houses and the charm of Andean customs. And all of this in the middle of the relentless desert and its topographic variations, which can from time to time make mountains rise, sandy surfaces spread out or depressions be formed – amazing to your eyes! The relentless aridity of the desert is interrupted only by red rivers (due to the color of clay) and brightly colored lakes of the Andean plateau.

Before telling you about my experience, it is important to point out that San Pedro is a place with no more than 5000 inhabitants, located in the second region of Antofagasta, 1670 km north from Santiago, Chile’s capital. San Pedro’s main source of income is undoubtedly its tourism, so an entire range of services has been organized around this activity – services such as craft stores, call centers, cyber stores, police, archeological museums, restaurants, tourist agencies, hotels and hostels. 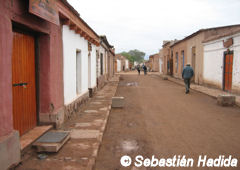 I remember that what first impressed me about San Pedro when I arrived was the respect for the construction criterion. The great majority of houses use clay among their materials, which gives them their characteristic ochre color. An important proportion of these picturesque constructions are travel agencies, which arrange tours around the town. The choice of restaurants is also very interesting and it matches the most varied tastes and budgets.

One of the problems I noticed as soon as I found accommodation with my companion was the delicate electrical situation of San Pedro. Power cuts are frequent, especially after heavy rains. This type of difficulties, added to the repeated cuts in routes leading to the area’s main tourist attractions, is 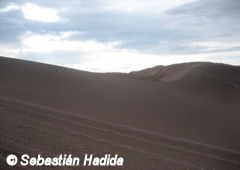 connected to the geographical position of San Pedro. Not in vain did a local of the region tellme that “the desert devours everything”, which suggests a fierce fight of man against nature. Despite the inhospitable conditions presented by the desert, thanks to the joint effort of natives and private investors, San Pedro is a jewel to be seized. 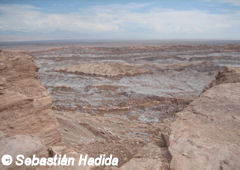 One of the most attractive sightings I did was the visit to the Valle de la Luna [Moon Valley]. Located 15 km (9.3 mi) away from San Pedro, it receives that name because of its appearance, similar to the moon surface. The first stop made by the van that transported us was an observation point 2500 meters (8,200 ft) high from which is was possible to gaze at the entire length of the Cordillera de la Sal [Salt Mountain Range]: Magnificent hills tangled with clouds and at whose feet luminous valleys lie all covered by salt stains. An inescapable sight. 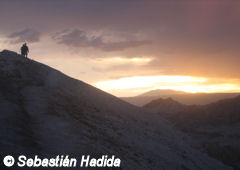 Near sunset, we climbed a dune and walked through a thin mountain road with precipices on both sides. Beyond the mountain line, a vigorous storm could be made out, and there was consequent suspense about the continuity of the excursion. But the only thing we got was a rumor of electricity in our hands when we raised them as if trying to embrace that dusky delight. And the higher we went, the stronger the rumor became. It became a vibration spreading throughout our bodies, which produced a sound that upset some of 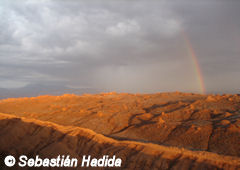 the kids who came along. But to me it was just fun.

A little before sunset, we could see that to our left, over the horizon of dunes and hills, lay a rainbow which exceeded any compliment of beauty. After a photography session, we abandoned ourselves to the contemplation of it.

Another excursion with lesser scenery impact but with higher sport and adventure intensity was the bike ride to the Valle de la Muerte (Death Valley). We rode 7 km (4.3 mi) on the motorway up to the 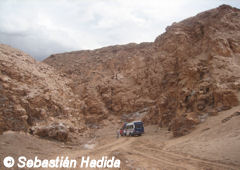 entrance indicating the way to the Cordillera de la Sal. We entered the winding path between two rock walls flanking it. We went forward until we reached a point where there were dunes and capricious rock formations before us. Right there we left our bicycles, took our sandboards, and picked the most convenient dune to start our activity. 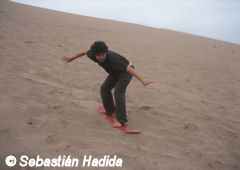 For those who don’t know about sandboarding, it is a sport full of vertigo and adrenaline, which consists in sliding over the sand and trying to keep the balance of your body over the board while sliding down at an extreme speed.

Any worthy tourist who ever traveled to San Pedro must have visited the Tatio geysers. This is the most famous tour, the one nobody wants to miss, due to its prestige as being the biggest geothermic field in the southern hemisphere and the third one in the world. 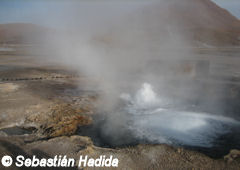 It was worth having spent the night awake to be ready at 4 in the morning, when the bus would pick us
up to start the excursion. You see, it is early in the morning and up until 8 am that geysers are most active, which warrants the sacrifice of visitors, and some groan from them too. But none of that compares to the concert of flowing vapors released by craters burning at 85ºC (185ºF). 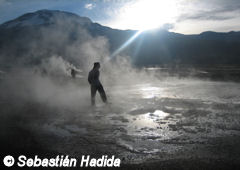 It was great to taste with our eyes the combination of the smoke with the lights of dawn. The picture was then completed with the impressive sight of the Andes Mountain Range on the background.

An unforgettable experience was to submerge myself in a hot thermal water pool a few meters away from the geysers, the temperature outside being below zero (because the geyser field is 4320 meters [14,200 ft] high).