The stone that speaks the language of Earth

Such as the villagers tell, the stones roll by themselves during the nights and the wind whispers when playing with them in the heart of Somuncurá. This Patagonian plateau is filled with much beauty and mystery, where the sonority of the silence of the barren landscape becomes almost touchable, with shape and density, accompanied by movement and life.

Its name is an Araucanian word that means ‘rock, boulder that sounds or talks in the language of the earth”, samples of an unique aquiferous reserve sprout here, a place of exceptional fauna with unique species and, above all, an open book that tells stories and old traditions.

The Somuncurá’s Plateau, denominated by the geologists as ‘an island in firm land’, is a volcanic rock high plateau of approximately 15.000 square km. between the provinces of Río Negro and Chubut. It is 300 millions years old, an estimate, and it appeared when the ocean still covered most of south America.

This plateau spreads across like tongues over the immense environment of surrounding lower parts of the terrain. Inside of it, there are gorges, lagoons, hills, water springs and streams. In the places between the gorges and the corners by the foot of the hill, there are micro-valleys and there, their little towns. 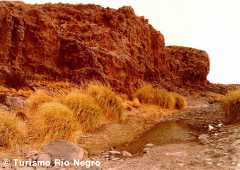 The plateau is a natural protected area, declared in 1993, as the Natural Integral Reserve of “Meseta de Somuncurá”. The reasons for this declaration are given by the geomorphological, climatic and palaeontological importance it has. The existence of unique species found nowhere on the face of the earth but here, such as the ‘mojarrita desnuda’ and other subspecies like the little frog of Somuncurá, the ‘pilquines’ inhabitants of the rocks,  guanacos, avutardas,  eagles, swans, etc., comprised an important field of study for biologists.
This new protected area represents, thereby, a land of varied expectations for scientists and environmentalists. But, at the same time, it was perceived as a threat  by the inhabitants of the area, who felt this declaration would menace their rights over the lands they occupy and their possibilities of remaining in the same place.

The model they probably had in mind, was the one from the traditional National Parks, in which it is forbidden to live or remain inside. Perhaps the sound of the Mapuche’s claims resounded in their ears; old inhabitants of the territory that today comprises the Lanín National Park and who had to manifest their protest very strongly in order to be able to regain their right to carry on with an ancient tradition involving a religious ceremony that can only be made in an specific place, between the mountains and the lakes of the National Park.

Nevertheless, the chosen option in this case, closely to the characteristics of the program
“The man and the biosphere” from UNESCO, contemplates the incorporation of the inhabitants in the environmental care and preservation. The particularity is that human beings are not considered as intruders but as another factor of change, highly integrated to the surrounding nature such as animals, plants and the water streams to be protected.

A step forward, in the project of the natural protected areas: not only the inhabitants with a way of life completely adapted with the environment and in interaction with it, not only they are not displaced but they are assigned an important role: the protection and the surveillance of the lands. Thus, part of the investment is oriented to education and formation of the inhabitants, only through knowledge they will be able to be fully aware of the surrounding and daily value.

Somuncurá is one of the barely explored options in Patagonian tourism, with uncountable spots and places without contamination that allow the visitors to have a personal experience in intimate contact with nature. It is one of the places with the lowest population density

in Argentina, a painted steppe with historical towns born around the water springs, in the middle of one of the purest atmospheres on earth.

The outings to the plateau can be made with guides or Baqueanos, by horse, in 4×4 vehicles, car or bicycles. The activities offered are: photographic safaris, lunches in huge natural grottos, walks along footpaths carved by hand, pickaxe and shovel by the villagers in order to be able to contemplate the immensity in all its splendor. All these options will take you to the encounter with the real, wild and primitive Patagonia that, protected by rocky and abrupt walls of lava, resembles a castle or fortress where once Tehuelches and Mapuches inhabited.

Upon arrival, go to the Municipality of Valcheta (Tel. 02934-493163) or to the Museum building, where you will get information on this guided visit to the Somuncurá Plateau. Rides on horseback and trekking are a good option for this unforgettable photographic safari. 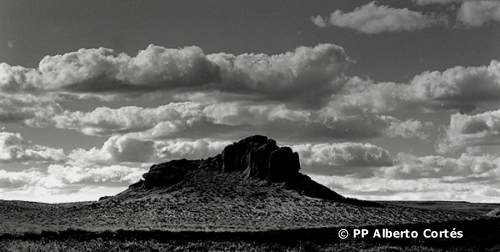 Most of the excursions depart from the town of Valcheta, located in the valley of the namesake stream. From there, numerous tourist, ecological and adventure activities depart. Guided tours to La Gotera and its mineralized water streams, to Chipauquil to catch sight of the mojarrita desnuda along the way or towards the Cerro Somuncurá Grande (the big hill of Somuncurá). From Valcheta until the Corona Hill, the mystic axes of the Tehuelche’s culture, that dominates the plain of the plateau as its maximum height (1900 m.a.s.l), there are 160 km. in between and it can be taken in full day excursion or with the option of spending the night. During June, the national celebration of La Matra and the handcrafts is held. The artisans of the place outstand for their knitted autochthonous Mapuche works of the province, the wood carvings, the leather or stone works can also be added. The celebration is accompanied by folkloric spectacles which highlight local and regional values.

The challenge awaiting the traveler is unexpected: a “natural tourism” in order to experience this land free of structures and going across desolated landscapes of complex and uneven geographies, finding the richness of everything and everyone’s origin. Feeling the nexus between the past and the present, accepting the challenge of living the nature and discovering any of its several mysteries.