In Salta three different environments can be easily distinguished, being very diverse, originated by the progressive altitude increase in East-West direction. In other words, each and every one of these regions can be seen as a step in ascent from the 200 meters above ocean level, to the 6000 meters of the mountain range. 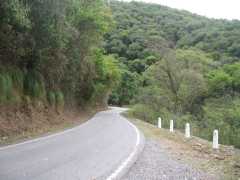 It extends between the 200 and 800 meters above ocean level. The characteristic features are the vast vegetation, the subtropical weather, quite warm during summer, and abundant precipitations. The temperature can surpass 45ºC during summer.

In fact, the rainforest occupies only a portion of this region, whereas another part is occupied by woods and semi-arid plains.

The rainforest is called Yunga, it has a great biological diversity and it extends in wedge form over the dampest slopes of the Andean mountain ranges in Salta and in Jujuy. 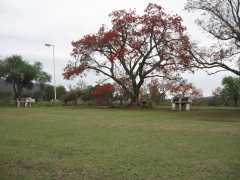 On the other hand, given the little difference in heights, the rivers and water streams tend to stagnate forming swamps and bogs.

The typical culture of this region is the banana. There is also coal production and development of the cattle farming.

In ‘Rosario de la Frontera’ it is possible to enjoy thermal waters.

The flora of this region alternates among the sylvan vegetation, with gigantic specimens of quinos, oaks, tipas, lapachos and palmares, and the ‘chaqueño’ forest is located in a lower level.

The fauna is the most varied of all the regions: monkeys, pumas, peacocks, herons, fawns, anteaters and bats, among others.

It is the step of the center. The rain diminishes from east to west, producing slopes filled with vegetation alternating with others ones dryer. It is the most fertile and populated zone.

Here are the famous ‘Cachaquíes’ Valleys. Among others, the Lerma ones can be found, Siancas, San Andrés, Santa Victoria and Iruya too. In the Valley of Lerma the capital of the province is located.

The altitude goes from the 800 to the 2000 meters above ocean level.

The valleys are areas located between the mountains that have been filled up, through time, with sediments being ampler and flatter than the gorges.

Through here, the main rivers of the region find their way: the Bermejo and San Francisco.

Summer (from October to March) is the main season for the raining. In addition to the cattle farming, the production is related to the culture of the tobacco, the hemp and the citruses. 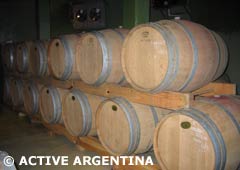 nd, in the ‘calchaquíes’ valleys, the grapevine gives origin to one of stars of the region: The torrontés wine.

For the locals all the wines produced in the valley, of this region, are “vallistos wines”.

Here, in the zone of Cachi, is located the National Park Los Cardones.

The unforgettable: the colors of the hills, filled with a vast variety of tonalities caused by minerals. 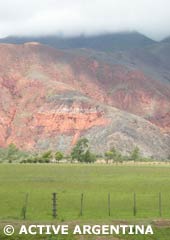 It is the highest and the most arid region. It goes from the 2500 to the 4500 meters above ocean level, having mountain peaks arriving to 6000 meters.

Constituted by a high plateau (the Puna itself) with high summits that comprise the mountain range. The highest summits are located in the edges of the Puna and many are in the limiting borders with Chile. Some of them are: ‘El Nevado’ of Cachi, the Socompa volcano and the Llullaillaco Hill.

The climate is dry here, inclement, with frequent winds and snowstorms. The thermal amplitude is extreme: intense heat during the day and very cold nights. The vegetation is scant, only xerophilous plants can be observed, and the fauna restricts to the birds characteristic of the heights: it is the kingdom of the Andean condor.

The great depressions are occupied by salt mines of great extension. 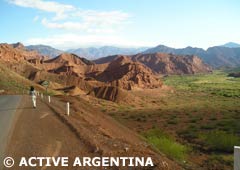 The rivers of the region run through deep cracks called ravine or gorges. These gorges are natural accesses to the high plateau.

The most famous ones are: Gorge of the Toro, through where the international railroad to Chile circulates, the Escoipe gorge, near to the capital of the city, that communicates the Valley of Lerma with slope of the Bishop, and the Humahuaca gorge (Quebrada de Humahuaca).

The characteristic of the region is the barren land; only during January the frostings and the snowstorms stop. In between the gorges, during winter, the feared “white wind” blows, capable of dragging and freezing any living being in its way.

In a part of this region is located the famous “Tren de las Nubes”, or an alternative, the “Vuelta a las Nubes”.

Find out more about Salta