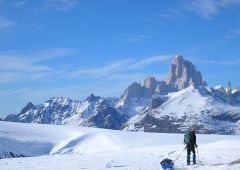 The Patagonian Continental Ice Field, a relic of the last ice age, awaits adventurers who dare to surround the imposing Fitz Roy and Torre hills.

The excursion can be done in two modalities: sighting of the Continental Ice from the Paso Marconi or Paso del Viento, or crossing on the ice, surrounding the Torre and Fitz Roy hills nd back to El Chaltén. Either way, it is a difficult expedition that must be done with a specialized guide and that depends on weather conditions. Suitable only for trained and experienced hikers who must be escorted by specialized guides. 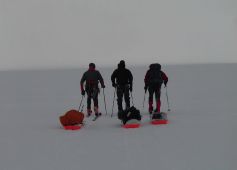 The short route takes three days, with a level between difficult and very difficult. You will sleep both nights in a wild campsite. The second day is the most exhausting, since you have to go up to the Marconi Pass with a significant unevenness which, depending on the weather conditions, may require ropes. The return is done through the Paso del Viento, from where the Laguna del Toro can be seen.

The longest option takes six to ten days of hiking, with stops in wild campgrounds, in the forest along the lakeshore, or directly on the ice, in an igloo half buried in the snow. The difficulty is extremely high, you have to be in very good physical and mental condition to participate. The reward is the wonder of one of the most amazing adventure tours in the entire world.

The Southern Patagonian Continental Ice Field is the largest ice surface in South America and can only be compared to Antarctica. Its size is equivalent to half Switzerland. It is a sample of what the planet was like 18,000 years ago, at the peak of the ice age.

The total route is 90 km. leaving El Chaltén to round the Fitz Roy and Torre hills and return to the town. Although it can be done in six days, ten or eleven are calculated because you may be delayed due to weather issues. Most of the time you walk and sleep on the surface of the ice. The season to do it is from December to February. 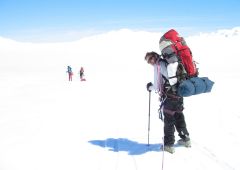 The adventure begins with a walk through the forest, lasting about three hours, to the foot of the Marconi Glacier, where you will sleep in a wild campsite. The second day, when you ascend the Marconi Pass, a drop of 800 m., is the most tiring one, especially since each person carries their own backpack, which weighs around 15 kilos. Crampons must be worn and depending on the glacier conditions it may be necessary to lace up. It is between six and seven hours of walking, with a spectacular view of the ice interiors and the mountain ranges that reveal in the background. 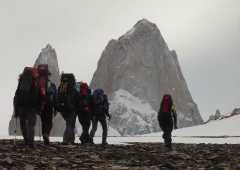 You will sleep in a camp on the ice. Then there are two whole days of walking through an almost flat terrain, always white, always ice and snow. It is the upper part of the Viedma Glacier. Thus, about 35 km are traveled until you reach the foot of some mountains. It is the Circus of the Altars. You will sleep in special tents, on the snow, at the foot of the legendary west face of Cerro Torre. The next day, already leaving the continental icefield, you will reach the Laguna de los Esquíes, and you have to use snowshoes and crampons.

During the last two days you go up to Paso del Viento, at 1550 m. altitude, with a spectacular view of Laguna Toro. You will then  return through two glacial valleys that flow into incredible green meadows. The last glacier, the terminal tongue of the Tunnel Glacier, and the river of the same name, are crossed with a zip line. Already in the middle of the forest, the final camp is made and you will return to El Chaltén through the Loma del Pliegue Tumbado.