Heading northwest of Chos Malal, approximately 40 km, you will find these two towns which lie only 5 km apart from each other. 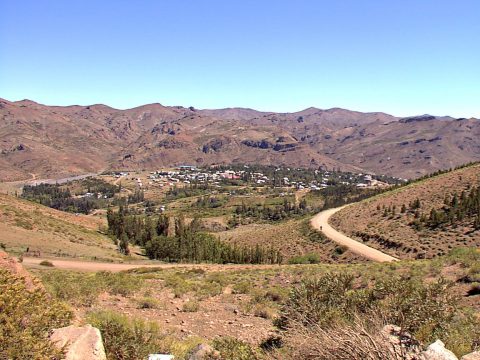 Andacollo is a name given by Chilean miners to honor their protector virgin . It comes from the quechua language and means “shining upon high”. The origin of Huingan Có, in contrast, is mapuche (it can also be written as Huinganco) which means “stream of Huingan (a native plant)”.

To arrive from Chos Malal you need to take the provincial route 43. You will cross two bridges over the river Curí Leuvú and later you will come near the beginnings of the Mount of the Virgin.

This part of the road is paved and, a few kilometers from Chos Malal you can observe on the right, for long stretches, a wide road that is surrounded by wire fence on both sides. This is special path for the shepherds that each year take their animals, mainly goats, towards their pastures. 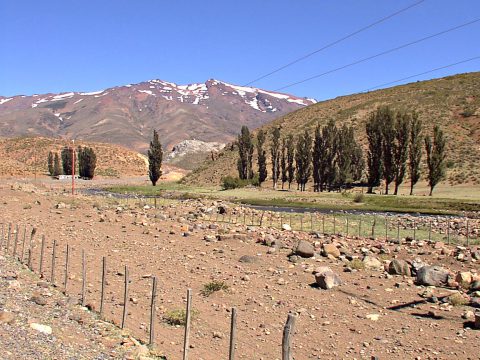 Pathway for the passing of goats – Patagonia Argentina

This ancient custom is firmly rooted in the zone. These nomadic nurseries can be viewed alongside the roads from early November when they make the journey to the new pastures in the mountains. Later, before fall arrives, they make their way back to the foothills, where the pastures have had time to rest. During their time in the mountains the shepherds live in precarious housing that are constructed from logs and other elements, practically in the open air. To take part of this experience is possible and would be a unique form of adventure tourism, although uncommon. 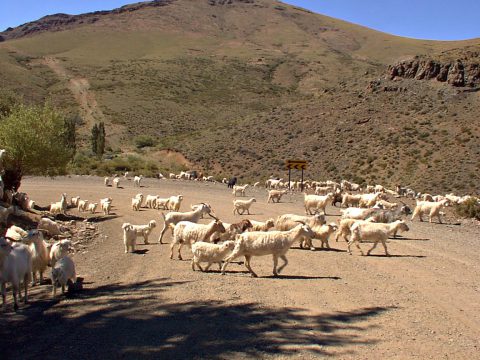 Outside Andacollo. Goats going to the “veranada” – Patagonia Argentinaa

20km from Chos Malal along route 43 is the entrance to the locality of Caepe Malal, where you can visit the interesting Municipal Museum Ana Biset, which houses the remains of an antique First People’s Cemetery that was found in this spot. It is made up of the remains of the Pehuenches that inhabited the zone in the 17th century.

A little bit after passing this sight the paved part of route 43 ends and becomes gravel, but in good condition. Once passing the Mountain Range of the Wind (la Cordillera del Viento), you will arrive at the locality of Andacollo. This city was the sight of the headquarters of the Department of Mines, due to its past as a place of mining richness. Today the mining activities continue but they are not as fruitful as in the past.

Although Andacollo can be visited as a day trip from Chos Malal, it is also a good departure point to visit some of the most impacting areas of northern Neuquén: The Lakes of Epu Laufquen and the Domuyo Volcano. There are places to spend the night and a service station.

5 km from Andacollo by route 39 on the left side of the Neuquén river and near the Huinganco stream, you can find the small village of Huingan Có, “the garden of Neuquén”. This small town is full of pines, poplars, fruit trees and fields of berries and is a true oasis between the mountains. The forestation began at the end of the 60s when don Rogelio Figueroa proposed copying an experience lived in his childhood in a school house to the mountains of Huingan Có. And it was successful. Today Huingan Có has the honor of being the first communal forest in Argentina and a nursery can produce more than 4 million tree saps per year. 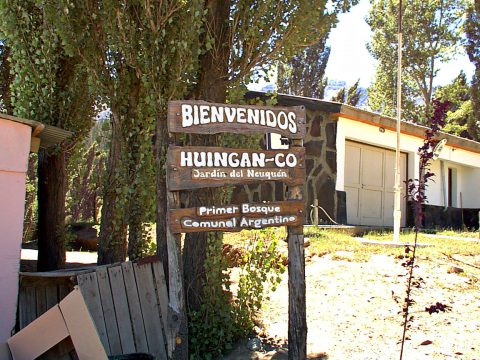 Huingan Có is a summer resort for locals, but it aspires to attract foreign visitors as well. And it will surely be able to do so, its attractions are many.

There is a preserve factory that produces regional sweets and jams whose fame crosses frontiers. There are also many fish farms, a municipal one in the center of town, and the others private on the coast of the stream, where they raise trout. You can buy frozen filets and, occasionally, smoked trout as well.

The Charra Ruca lagoon has all that is needed to spend a day outside. There are grills, a board walk, and a new swing to throw yourself into the river for the enjoyment of adults and children. 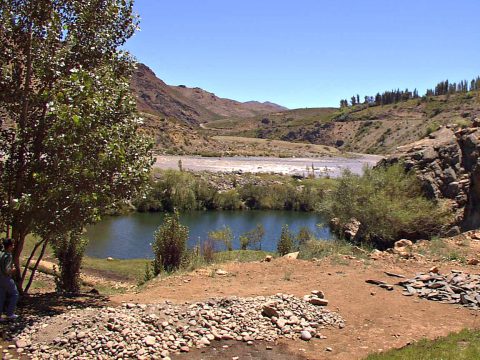 In the same sector of the lake is the Nature Reserve “Cañada Molina”, which you can visit with a specialized guide. This is the home of cypresses which are considered to be the oldest in the southern hemisphere, according to research done by the University of Tucson in the USA and the University of Mendoza. They are up to 2000 years old.

The Corona Peak, in the mountain Chain of the Wind, is also accessible by foot or on horseback. You can also visit the gold mines Sofia and Erika.