Very close to Puerto Madryn and the whales there is an exotic and special corner of Patagonia: Gaiman, land of the Welsh, full of traditions, old and new, as those arising out from the visit of Lady Di, Princess of Wales. This article will inform you of what an expert traveler of Patagonia should know about this fascinating region. 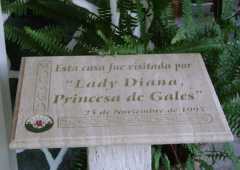 Gaiman is one of the towns that was founded by the Welsh settlers of the coast of Patagonia at the end of the 19th century.

This town seems stuck in time: streets with irrigation ditches that water trees not native to Patagonia, buildings transplanted from far away lands, like the chapels that were constructed by the Welsh upon arriving at this corner of the world. There are also customs that also come from afar, such as the traditional Welsh tea, accompanied by pastry, cakes and delicacies.

Among these traditions today we want to talk about two in particular, one that dates from the days of the foundation and another more modern one, which has become one of the attractions that winter brings to this region, and that arose from the visit of Lady Diana Spencer, before her unexpected death.

The 28th of July is the the Festival of the Landing or Gwyl Glaniad, which is centered in the chapels. It is a community ceremony in which the descendents of the original settlers and all of the towns’ population (as well as the occasional visitors) participate. They serve Welsh tea for all and in the courtyards of the chapels they organize a variety of contests, including equestrian ones. At night, there is a concert of traditional music that closes the day’s festivities. 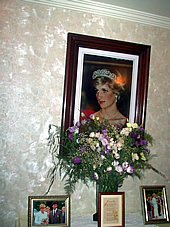 Another tradition that is more modern occurs each August 31st which honors Princess Diana of Wales, who visited the town and drank tea in a traditional tea house. The owners of the tea house have conserved the tea set that the Princess used in a glass case, with her photograph and other mementos of the day. The 31st of August, the day that she tragically died in Paris, people place flowers in the case to honor her.

According to the owner of the place, they do not want to do a preplanned event or anything exploitative, but rather what happened is that the people who knew that she had visited the house congregated there and started this new custom.

The day that Lady Di visited the tea house of Ty Te Caerdydd a children’s choir sang a few Welsh songs for her and she then talked with them in English and shook the hand of each one of them. Then, she drank a tea and ate a raspberry tart. Upon leaving, in spite of her being forbidden to accept flowers with thorns for security reasons, she took a red rose from a bouquet.

These small gestures displayed her sympathy and love for the people, and gave birth to a new tradition that is yet another reason to visit Gaiman, a small Welsh village in Patagonia, that awaits you nearby the whales and penguins.

Find out more about Puerto Madryn