Here is the second and last part of the story of the Gold fever in Patagonia.

Julio Popper, the intrepid Romanian, settles in Tierra del Fuego and founds El Páramo, an  establishment dedicated to the extraction of gold. But it will not only deal with that. This character who walks all the time on the edge of myth, will also invent and patent machinery, coin money and even form his own “army” to defend against looters. 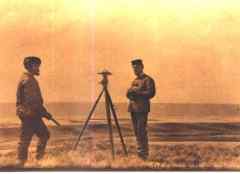 As we recall, at the end of 1887 Julio Popper was heading back to Tierra del Fuego with the papers that enabled him to exploit the deposits of auriferous sands that he could find (read the first part of this story). At that time, one of the government’s concerns was to achieve the establishment of populations in this remote region of the country. The Treaty of Limits with Chile had been signed a short time before, and the “gold rush”, which had been unleashed with the first discoveries, only created additional difficulties. The “beaches with golden sands” were just on the opposite side of the island, separated from Ushuaia by mountains and in an area of ​​very difficult control.

Popper was first and foremost an explorer. He liked to visit inhospitable places, baptizing in his way what he was discovering, feeling that vertigo unique to pioneers. But he wanted something more and the discovery of the rich sands on the beaches of the northern area of ​​the Bay of San Sebastian gave him the opportunity he was looking for: to be a pioneer in obtaining gold through a productive mining enterprise.

He settled in the middle of a desolate landscape, swept by the winds that he named “El Páramo”. He went first to Punta Arenas to recruit personnel. They did not pay much attention to him. The momentum of the first discoveries of gold in Cape Virgins had passed and nobody believed that he could make a fortune with that activity. But when the gold extracted by Popper began to circulate in the small population of the Strait of Magellan, the interested parties quickly emerged. And not all had good intentions.

One of Popper’s men tells that one day at dawn they saw in the distance some awnings with people. They were deserted sailors, escaped convicts, people of all races who came from Punta Arenas “to see what was going on.”

This caused the beginning of a series of increasingly strong incidents. In one of them Popper took revenge very hard of looters who had taken advantage of one of his trips to Buenos Aires to snatch 24 kilos of gold. The Romanian pursued them and “managed to restore the internal order of the establishment”, according to his own account. Apparently, he even went as far as to put them in prison, when in fact he did not have the authority to do so, and he returned them to Punta Arenas, quite battered (most of the usurpers were Chilean). This provoked the formal complaint of the Chilean government. Worth this episode as a sample of the personality of Popper: he was the one who commanded in their territories, he imposed the regulations and laws and was the one in charge of punishing those who violated them.

The retaliation was immediate. His enemies were not few: the Chilean gold prospectors, who saw in him a competitor, the governor of Tierra del Fuego, who felt his authority weakened in a whole portion of territory where Popper reigned, the delegates of the Chilean government in Punta Arenas who even signed a petition against “the vandal of modern barbarism”. The clashes that followed ended with the reduction to ashes of almost all Popper establishments.

The end of the company

The Washed Gold Company succumbed. In 1889 it was dissolved with total loss of its capital and without any benefit for its partners. In La Prensa newspaper, edition of December 13, 1889, it reads “The discovery of gold deposits gave rise to the formation of several companies for their exploitation, the most important one being directed by the engineer Mr. Julio Popper. His works have been interrupted by incursions by bands of adventurers recruited in Punta Arenas to destroy the planted fields. ”

Curiously, and as a further demonstration that Popper did not surrender so easily, that same year he registered in the Patent of Invention office a device that he called “Gold Harvester”, for the extraction of the metal contained in the gold sands. There were five of those machines installed in El Páramo. Today you can still see this harvester at the End of the World Museum in Ushuaia, where other objects related to life and Popper’s company in El Páramo are also kept.

Another of the “oddities” of our character, and one of the activities that have made him more famous, is the coinage of money.

Yes, in El Páramo, as if it were another country, coins of pure gold were minted in five different issues. Evidently this did not have the same transcendence at the time as it would  today, in that it not only it seems an unusual activity but almost a subversive one.

According to some specialists it is not known if they can be considered coins or medals, but this technical distinction is of little importance, because what is certain is that they circulated as money in the lands of El Páramo and throughout Tierra del Fuego. The quantity minted (15,000 grams of gold were used) does not allow to think that they were used simply as a souvenir.

The coins were five and one gram of pure gold. The five gram ones had on the obverse two stars with five peaks and in the middle the legend “Tierra del Fuego”, the date “1889” and the name “Popper”. On the back was read “Lavaderos de Oro del Sud” and in the center “5 grams”. The edge was ribbed. The one gram said “El Páramo”. These two were minted in the lands of Popper. According to Popper, he adapted and improvised machinery, carved punches, and thus with an iron will, he coined the first coins with pure gold from the ends of the world.

Like his machines, the coins can also be seen in the Ushuaia Museum.

The question that remains unanswered is why Popper did this. He spoke of the lack of regular communications between Tierra del Fuego and the Capital of the Republic, which made it impossible to get money and also from the inconveniences brought by the handling of dust and gold nuggets in transactions. Surely these reasons were real. But was not this a pleasure that Popper gave himself? He was a discoverer, baptized with names that endure rivers and mountains of Tierra del Fuego, was a pioneer, founded an establishment, set his own rules and had almost an army to enforce them and also had his own currency, with his name and seal.

In short, he carried out his dream in one of the most unknown corners of the planet, far from his native Romania …