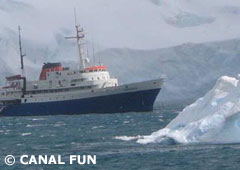 The polar regions are involved in many of the most important planetary processes:  the change in the level of the seas, the biogeochemical cycles, the global climatic change and, as a consequence of this, the basic human activities.

On the other hand, the Poles are a reservoir of the Earth’s past: in its frozen heart there is one of the most accurate history registers of the entire terrestrial ecosystem.
In spite of its resemblance and interconnection, these two areas have hardly had simultaneous focusing and investigation.

Maybe because of the distance between each other, of the diverse degree of human habitability, or due to more fortuitous reasons, most of the studies and observations are not taken into account as a whole. 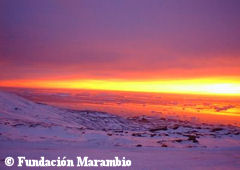 There are many activities already scheduled that have as protagonists Argentinian scientists with studies on Antarctica, the immense ice continent that hosts the South Pole, the most unknown one of the poles.

Some facts about Antarctica

Immemorial ice, active volcanoes, mirages and the mystery of Earth’s most remote lands that have never been touched by man’s hand and where reality seems to distort, Antarctica is all that.

Antarctica is even nowadays a big enigma, just as the first cartographers called it: “Terra Incognita Australis”. It was one of the last continents to be discovered and no one set foot on it until 1821 when there was still the possibility of being a huge iceberg. 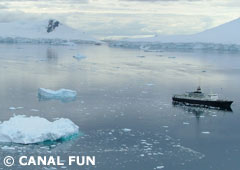 Man’s laws seem to bend and break in this unique place that grows each year with the seasons and where the day lasts 6 months just like the night and where there is the lowest humidity levels in the world in spite of the million of square kilometres of ice.

When winter comes, darkness comes as well, during winter solstice there is at least one day (actually, a night) in which the sun does not shine at all. The exact opposite happens during summer solstice, when the sun does not hide for a whole day. This happens because the rotation axis of the Earth is inclined with respect to the orbit around the sun. 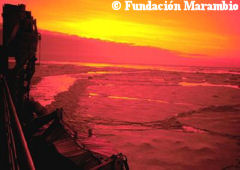 Its polar weather is harsh, the lowest temperatures and the hardest winds on Earth have been registered here. Even though the coasts are warmer than its interior, the Pole itself seems to be one of the quietest spots on Earth.

Just like its brother, the Arctic, strange optical phenomena are registered here as a result of the reflex of the light on the ice and the combination of said fact with the inclination of the terrestrial axis. The Austral Aurora is a lot harder to see than the Boreal, nevertheless, it is an event that cannot be matched.

The flora and fauna also show big contrasts between the coasts and the interior. There is no big variety of species but there is a large number of each one, since they are adapted to the climate conditions. 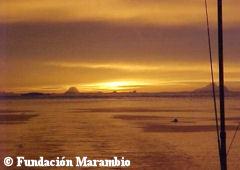 In the white land nothing is what it seems: sudden winds, ice clouds, life hidden under the water surface, mirages, entire months without sunlight nor darkness, lights on the sky with the continuous back and forth movement of the continent with the seasons, make up the background of this eternal place that only obeys to the laws of the ice desert.