April 20th. is the day of the American Aborigine. As a way of paying a homage to them we bring you this story that has got a happy ending: the Mapuches have recovered their Rehue, a totem located right in the middle of Lanin National Park, in the province of Neuquen. 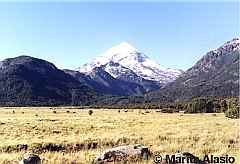 This totem, which belonged to the Mapuche community inhabiting those lands, is inside the Ñorquinco sector of the Lanin National Park. During the forties, when the National Parks were constituted, the Mapuches were dislodged from their lands, their houses destroyed and their belongings, burnt. Just in case someone
dared to doubt who was the new “owner” of these heavenly lands.

“One day Mr. National Parks came and expelled us after burning our homes”, would recall Rosa Catrileo a few years ago. In her eyes it was still possible to observe the resplendent flames as well as a desperate gesture motivated by the incomprehensible fate she had to put up with. Something or somebody unknown to the Mapuches (“Mr. National Parks” according to her) was taking away from them what had always been theirs.

At this point it is necessary to mention that, for the Mapuches and their way of understanding the world, the word “property” has a different meaning to the one we, the “civilized white men”, assign to it. Within their cosmovision, man and nature conform one entity where man is part of nature, does not “possess” it and participates in it. This small piece of the world was their land and they belonged there.

“We do not ask for the Rehue to be given back to us, we just want to be a part of it again”, said a young Mapuche girl recently, while attending to a meeting with the National Parks authorities during which the possibility of territory restitution to the aborigines was discussed. No other phrase reflects more clearly this idea of belonging.

The uproot provoked when they were expelled decimated them and made it impossible for many of them to come back.

But some remained. And those who stayed never forgot their Rehue, the only appropriate place to make their pleadings to Nguenechen, the Mapuche god. Because ‘Rehue’ means just that: pure, genuine place”.

Some of them not only stayed and remembered but also fought, joined forces and claimed. And finally they got away with it.

On August 14th. 2000, the Mapuches at Ñorquinco, in a very emotive ceremony, got back the possession of the lands where the Rehue has always been located. Mysteriously, or thanks to the energy and sacred strength it irradiates according to the Mapuches, it survived to the fires and all sort of calamities.

It is a totem carved in an old cypress stem, with an anthropomorphous shape, something quite strange given the fact that there are only a few with similar features in Chile. It is about 6 feet tall, and located in a “pampa” or wide open space in the middle of the forest on the Andes hillsides, very near to the border with Chile. The place is limited by an araucaria wood, and a stream to the west. The carving in the wood faces to the east, from within the center of a hollow.

In Mapuche language, “re” means pure and “hue” means place. Here the Mapuches celebrated the Nguillatun or Camaruco, annual ceremony in which the Mapuches would plead their god for different favors, like the ending of drought, pests or excessive rainfall.

The last Nguillatun that was celebrated took place in year 1934 or 1935, when the Lanin National Park was created. One of the main objectives of the Mapuches when claiming for their Rehue was to be able to hold this ceremony again at the right place.

The recovery of the lands

It is difficult to describe the expressions of the Mapuches that were present on August 14th., 2000 when they were given back more than 700 hectares that had always been theirs, facing the Rehue at 1,800 meters above sea level.

There was happiness and anger. Laughs and tears. Thankfulness and upbraids.

“There is so much history to be repaired… this is not going to cure the pain, but at least presents a different future for this magnificent people” said the officer in charge of administering the National Parks that was present at the ceremony.

“This battle is over, but it is not the last. We will persist claiming for what belongs to us” said a man of the Mapuche communities. And he thanked the authorities that were there for the restitution, especially to Neuquen province’s vice-governor, a man who speaks the Mapuche language almost as perfectly as the oldest Chiefs.

Speeches in Mapuche and Spanish were delivered and the party began to rock with the sounds of the native instruments played by the youngest.

Rosa Catrileo is no longer alive in order to see this miracle happen but Laura, one of her descendants, looked around with irrepressible emotion: “my grandfathers are listening”. And she pointed towards the hillside where there is a cemetery. Now she knows that, years from now, she will also be able to stay forever in this little piece of the world, her world.