People held their breath  for a second that seemed to last a century, their pupils turned into winter suns, and an instant later the air was released along with the muffled sounds of thrills. 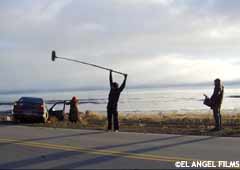 That train had just crossed over the wall and headed at maximum speed towards the public. When the spasm of pain seemed to be immediate, the train did not stop, nor did it go forward. It stood there stuck to the wall and invulnerable to the
wind. 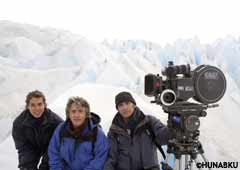 Totally unrelated to the so-called Magic Realism, the story above could have well been the confession of one of those first Argentinians who did not run off in fear during the projection of the Lumière brothers’ Arrival of a Train at La Ciotat (L’Arrivée d’un train en gare de La Ciotat) on July 18th, 1896, at the Odeon Theater on the corner of Corrientes Av. and Esmeralda St.

The first steps of cinema in Argentina were like that: overbearing. In that same spirit, the seventh art made it to the most impenetrable corners of the country and settled throughout the whole territory, where sunrays blaze the Quebrada de Humahuaca, and where they die in the ice cold at the End of the World. 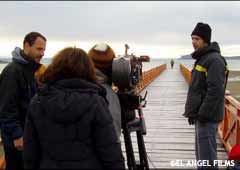 Seduced by Patagonia’s heterogeneous and dreamy geography, cinema has painted its pictures in these colors and decorated its shots with these landscapes. Any kind of story can be set in this Southern land, from a hope-inspiring ballad like Historias mínimas (Intimate Stories) to a tragedy like La Patagonia rebelde (Rebellion in Patagonia).

The first moving images in the area are supposed to have been made by the Italian Alberto Agostini. The priest, who arrived in the early 20th century in Tierra del Fuego, was enchanted by the song of the Sirens from these shores, could not hold himself like Odysseus did, and surrendered to the beauty of the landscape. Part of this surrender are these first film records he made of the area.

Some years later, historical fiction thrived in the area. One of the most remarkable films is the above mentioned Rebellion in Patagonia by Héctor Olivera. The story recreates the slaughter of the strikers by Varela’s troops in the ‘20s. As if it was contagious, the film itself aroused great controversy, censorship, and persecutions.

A Place in the World 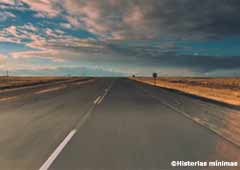 When we talk about Carlos Sorín, it is impossible to avoid talking about Patagonia. Most of his filmography was made in these lands. In an interview he gave for the Latin American film magazine El ojo que piensa, Sorín states why he found his place in the world: “My attraction to Patagonia comes from different reasons. I like deserts, bare landscapes. The first thing was the military service, which I completed in Patagonia, and I lived there for a year, which marked me quite a lot. Then, I happen to be very fond of travel literature and of the great naturalists from the 19th century. In a world as familiar as today’s, Patagonia still hides some mystery, something from the end of the world that attracts me deeply. And also I enjoy traveling very much, to drive alone- sometimes I drive without knowing exactly which road I’m going to take, and Patagonia is the ideal place for that: you never know where you’re going to spend the night.”

La película del Rey (A King and His Movie), the director’s first film, is about a filmmaker who undertakes shooting a movie about the life of Oreille Antoine de Tourens, a French monarch who established himself in Patagonia and intended to set up a kingdom.

His second film, not as successful as the first one, was Eterna sonrisa de New Jersey (Eversmile, New Jersey). It is about an American dentist who is sent to go across Patagonia in a campaign for dental hygiene.

A few years later, in 2002, Sorín is back on track with Intimate Stories. The province of Santa Cruz, the setting for this film, contributes to create in the story a strong unquestionable contrast between the immensity of the environment and the smallness of human beings. The sky and the road to the horizon become infinite, and the traveler -or the car- vanishes, it becomes a tiny speck in the landscape.

In 2004 cameras are back in the South. This time they will shoot the scenes of El perro (Bombón: El Perro), which repeats the elements of its predecessor: simple characters played by non-professionals, whose emotions are projected into the landscape. And those boundless roads that embody hope to the eyes of the lead character, Juan Villegas.

Another filmmaker drawn by this region is the German Werner Herzog. In 1991 he shot in Santa Cruz Schrei aus Stein (Scream of Stone), which is about the rivalry between two climbers in Cerro Torre.

Marco Bechis, in Alambrado (Barbed Wire), and Fernando Ezequiel “Pino” Solanas in El viaje (The Journey), are also attracted by the South, in this case more particularly by Ushuaia, the setting for their stories.

In recent years, the Southern landscape has also seduced such filmmakers as Sandra Gugliotta, Pablo César and Pablo Trapero. Gugliotta set a big part of the story of Las vidas posibles (Possible Lives) in Los Glaciares National Park. The plot synopsis states that “the cold weather and desolate Patagonian desert are the perfect setting for this story, which unfolds in an ambiguous territory”.

In Pablo César’s Hunabkú, the glacier itself becomes an element of the plot. The lead character, a 13-year-old boy named Lucas, walks around the Glacier awed by its magnificence, with the strange feeling that he will find in it the answers to the mysteries that haunt him. Many scenes then are lit by the snowy eternity of the glacier.

Nacido y criado (Born and Bred) focuses on the reasons why many of the Patagonian new-comers say they have arrived: to get away. From what? In the case of the lead character, Santiago, from madness. Santiago tries to find the freezing cold of oblivion in order to survive the tragedy that has torn his family apart. 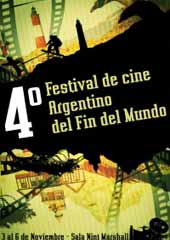 The proliferation of cameras, lights and actors, of which we have mentioned only a few, is followed by the creation of numerous film festivals.

The 8th edition of Imágenes de la Patagonia Festival will take place in mid April, 2009, and Neuquén’s Filmmakers Association (Asociación de Realizadores Audiovisuales de Neuquén – ARAN) promises it will be “a great film festival and a celebration of culture”. The Festival organizes a contest and is open to filmmakers around the country. 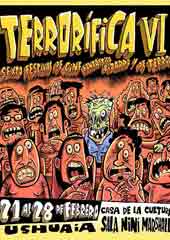 Ushuaia seems to be the favorite host for audiovisual contests. Besides its traditional music, art, and gastronomic festivals, the Primer Festival Internacional de Cine del Fin del Mundo (First End of the World International Film Festival) was held in 2008. The city also hosts national festivals, such as the Festival de Cine Argentino del Fin del Mundo (End of the World Argentinian Cinema Festival), which has completed its 4th edition, and Terrorífica VI, the 6th edition of the Fantasy, Bizarre and Horror Films season.