At Marine World Theme Park (San Clemente, Argentina) survives a young specimen of Orca, the only one in captivity in South America. Its tale varies greatly depending on who tells it. Draw your own conclusions. 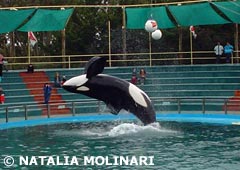 Kshamenk is a strong young male of a species of whale dubbed “killer” by the way they hunt seals, their natural food. Although this name for nothing does justice to their habits and skills.

The story began when Kshamenk was 5 years old in 1992, and was hunting on the coast of the Province of Buenos Aires, a little away from its natural habitat which is north of Patagonia. Probably between Valdes Peninsula and the shores of the Rio Negro Province. This situation is not at all abnormal, since Orcas travel long distances to obtain their food.

And here the differences between the stories begin, according to the narrator.

According to his captors, Kshamenk, along with other killer whales, washed up on the muddy shores of Samborombón Bay. At low tide the group could not return to the deep water. An operation to rescue the group began but some could not be saved. Of the entire group only Kshamenk survived, and from that moment on he was in captivity. During the first years he lived with Belen, a female orca was also rescued from a stranding few years earlier, in 1988. Both grew up to the point they could reproduce, and Belen became pregnant but miscarried in 1998. Finally she died from a kidney disease in 2000.

Since then Kshamenk is alone. It is a young male and the lack of a sexual partner has made its temperament become more aggressive.

In this situation, the oceanarium decided to integrate it into a program of assisted reproduction, in partnership with a similar institution in the United States. Kshamenk should be moved there where he would remain several years in the company of a female Orca, which would also come from France…

This project is on hold since different NGOs have turned to Justice to block it.

For institutions like Wilderness Foundation (WEF) and the Free Willy-Keiko Foundation (FWKF) things were totally different.

At the time of Kshamenk’s capture, the killer whales were hunting off the coast of the Province of Buenos Aires, through a common practice which consists of intentional stranding. It is possible that during this activity they were surprised by the low tide and have been for a few hours in a hazardous situation, which could have easily been overcome by simply carrying the Orcas into deeper waters. However, these organizations think that staff of the theme park provoked the situation using large fishing nets the orcas could not traverse to return to sea and thus remained trapped by the tide. They also argue that this practice is not new, but was previously used to capture other examples: the same Belen and largest orca, Milagro, the first one that had the marine park.

When Bethlehem died, apparently four months pregnant, Kshamenk began to become increasingly aggressive and is suffering high levels of stress since then. These same organizations suspect further that his health is deteriorating.

Just as the history of our orca has different versions, its future also faces a dilemma. While current owners insist that all scientific arguments prove they are right and that the release of the animals that have been in captivity will end with their death, wildlife advocacy organizations say the opposite and fight for his reinstatement in Patagonian sea waters, where he belongs.

There are several arguments supporting this initiative:

– On one hand, they claim that an animal born in the wild freely is a public good and it belongs to all of us, thus denying any right to private ownership.

– They also note that the release of the whale would not be as complicated as the previous experience, the release of Keiko, since in this case it is an animal that was captured when he had learned to hunt and other skills related to their life freedom.

– They insist, moreover, that under a mutual cooperation program course, there is actually a trade agreement between the two aquariums, and Kshamenk has been rented (or sold?) for a large sum of money.

Supported by these fundamentals, they have launched a campaign whose first achievement is the legal impediment for the orca to leave the country. It has also been studied where the intermediate stage could elapse between the captivity and the full release: Caleta de los Loros, in Rio Negro Province. It is also estimated a cost for the project, and the government of the said province along with the Wildlife Foundation are willing to invest that money.

According to O’Barry, the trainer who helped in the release of Keiko and has already made several trips to Argentina to assist in the case of Kshamenk, Argentina has the opportunity to give the world a message of respect for the rights of the nature, a message that can not be taken from the United States, where there is full protection for the millionaire captivity industry “.

However, time passes and Kshamenk still shows his fallen fin, symbol of his sadness, in the minimum pool pretending to be sea in San Clemente, very far from home Patagonia. Will Kshamenk go back home someday?